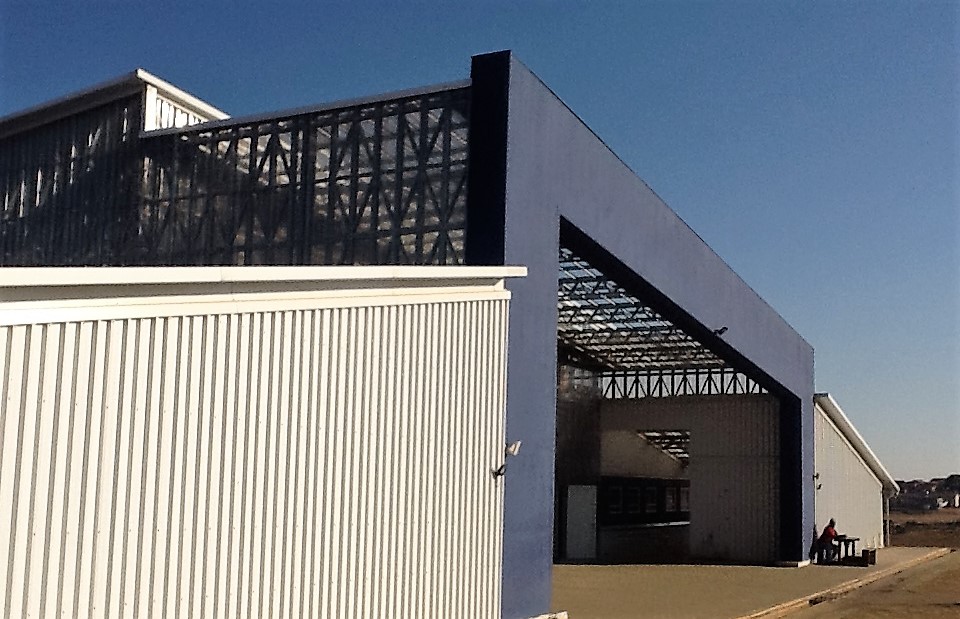 Exciting developments in the education sector in South Africa

Having been involved in school projects for over a decade, we are aware that the majority of learners in this country are severely restricted by the inherited apartheid model. Township and rural schools offer a very different education experience when compared to the schools in previous white areas. ‘Model C schools’, are generally schools in previously white suburbs where school governing bodies set the fees and government funds around half of the teachers (set by a pupil to teacher ratio that these schools improve on themselves, in addition to many specialist teachers). Fees at these schools range from around R15 000 a year to R40 000, making these government schools actually, semi-private. Class numbers are around 25-30 and most have swimming pools, libraries, halls, sports fields, computer rooms etc. On our website, schools like Manor Gardens Primary School, Kloof Senior Primary, Winston park Primary fall into this category.

It is extremely disappointing to see, that despite government having built many new schools, for most of the existing township schools little has changed since democracy. We visited a number of schools in Umlazi recently when doing research for a school project in the area – for example this small primary school (see pics below), and similarly the Umlazi Commercial High School. These schools do not have libraries, almost no sport facilities and no hall. Computers are not usually available for learners except those studying computers as a subject in High School. Education is basically free, with a small SGB fee of under R 1000/ year. Class numbers are 40-50. The atmosphere in the school and dedication of the teachers depends mostly on the Principal’s influence –  in the latter example an inspiring, dedicated man who is also a teacher and in the case of the former, he was absent and a general sense of disorder prevailed. 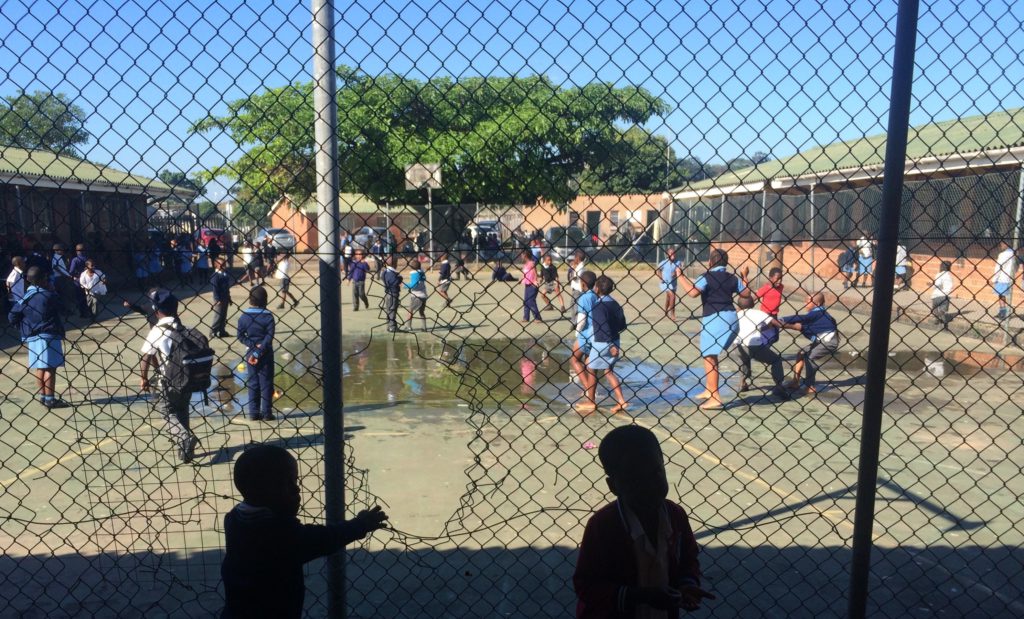 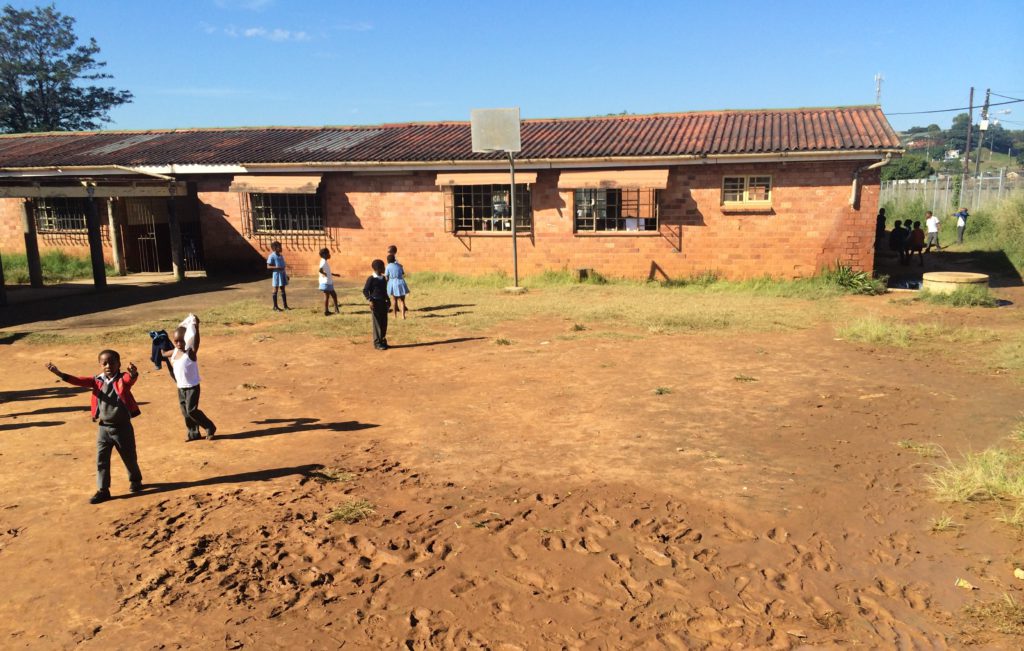 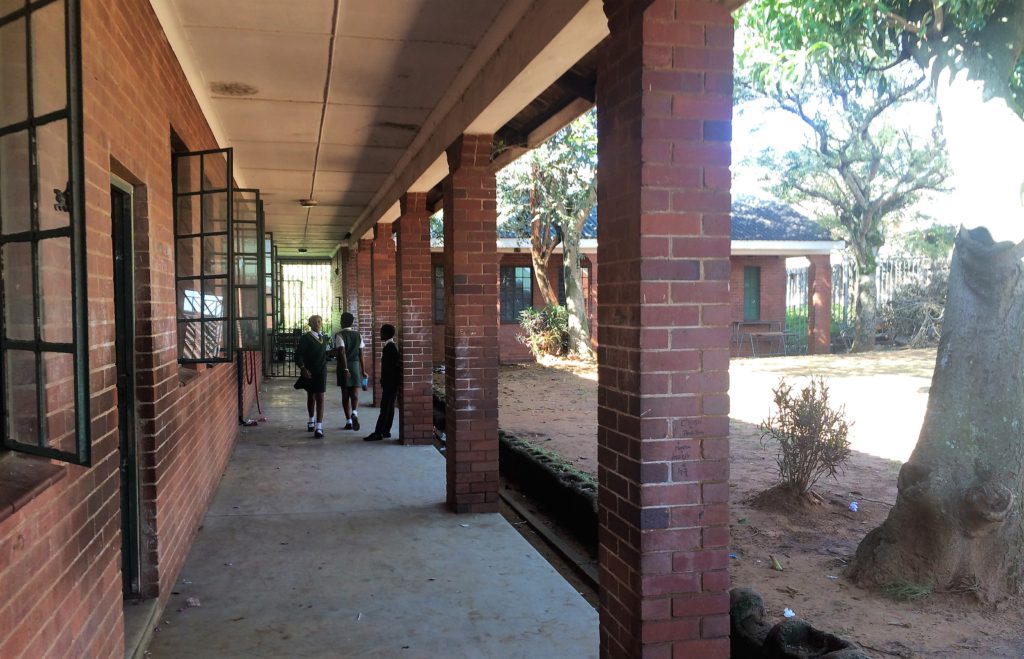 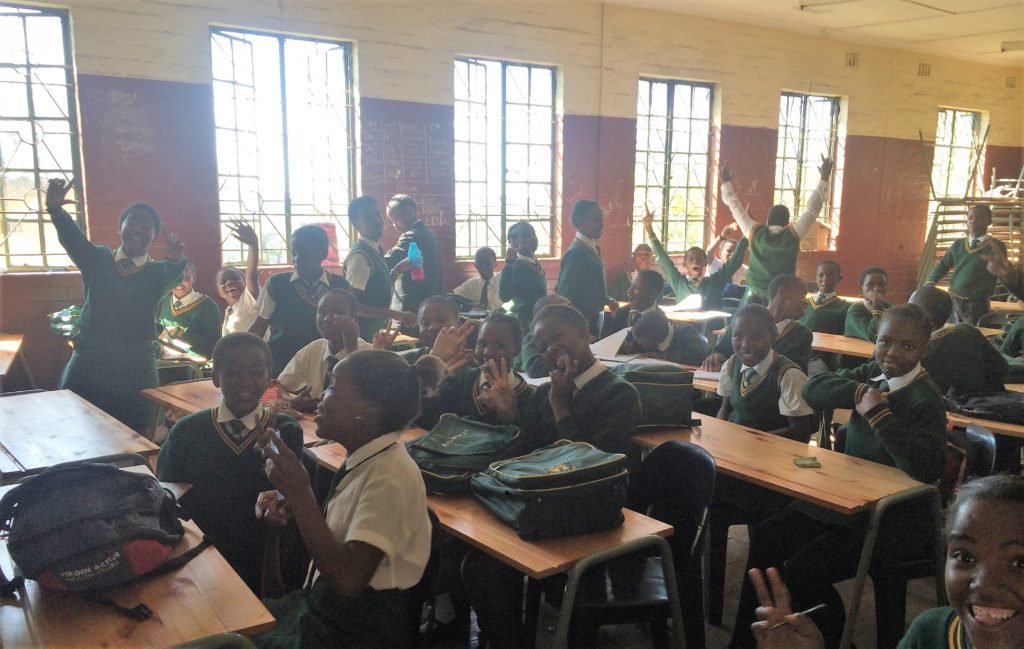 So for township-dwelling families who are earning enough to send their children to a good previously ‘Model C’ schools lengthy bus trips are involved (townships being located on the outskirts of cities) but just getting them in is a challenge in itself. The ‘Model C’ schools turn down hundreds of applications a year – kids from the area have to be accepted first, thereafter they give places on a merit basis from out of the area.

Then of course there are the private schools with fees of around R80 000 to over R 200 000 per year with state-of-the-art facilities and class sizes of around 20. There are some more reasonably-priced private schools around but from what we have seen their offering is not as good as the previously ‘Model C’ schools and again not generally located in the lower-income areas.

Right, now that we’ve painted that picture – let’s get to the exciting part !…

Aware of this great divide in education and recognising that little will change in this country until education improves, a number of forward-thinking, change-making companies and organisations have been working on a new model for SA schools : ‘the affordable private school’. The aim being to make really good education accessible to more. We are very excited to have been appointed to design one of the first of these in Durban – a combined, co-ed school (Grade R to 12) in Umlazi, south of Durban. As part of our research we have been looking at the local schools (see above), but also at examples of other ‘affordable private schools’ – starting in Johannesburg. Obviously affordable is a relative thing, and with half of our population living on under R1000 a month, these will not be affordable for most families, however, for the ’emerging middle class’ the options will improve substantially. The aim for these new schools is to provide an education that is at least equivalent to a ‘Model C’ school, with fees in a similar range, but the challenge – they are totally private and not subsidised by Government.

SPARK SCHOOLS was the first of these that we approached. We were given tours of 2 of their campuses “SPARK Bramley (a re-purposed old age facility in a well-established Northern suburb) and SPARK Carlswald (a brand new school in a new residential estate area near Midrand). Both of these are Primary Schools. SPARK Bramley is a wonderful campus – the scale, layout and orientation of the original buildings is perfectly-suited to a school and the spaces work well. Well-established trees add to the child-friendly atmosphere, along with some great colour features and astro-turfed areas for play. The energy and enthusiasm of the morning assembly – outside on a chilly Jo’burg morning – was really great to experience, but also the self-discipline and commitment that every child, to the smallest grade R seems to have been instilled with at the school. Within the school system, good communication and conflict-resolution skills are developed, and there is a generally respectful atmosphere between all involved. These independent life skills are essential and carried through to the learning methods – some of the sessions are self-study, and other computer-focused with kids working at their own pace – the ultimate goal being realisation of potential. The computer room is state-of-the-art, but there are no sport facilities on site. 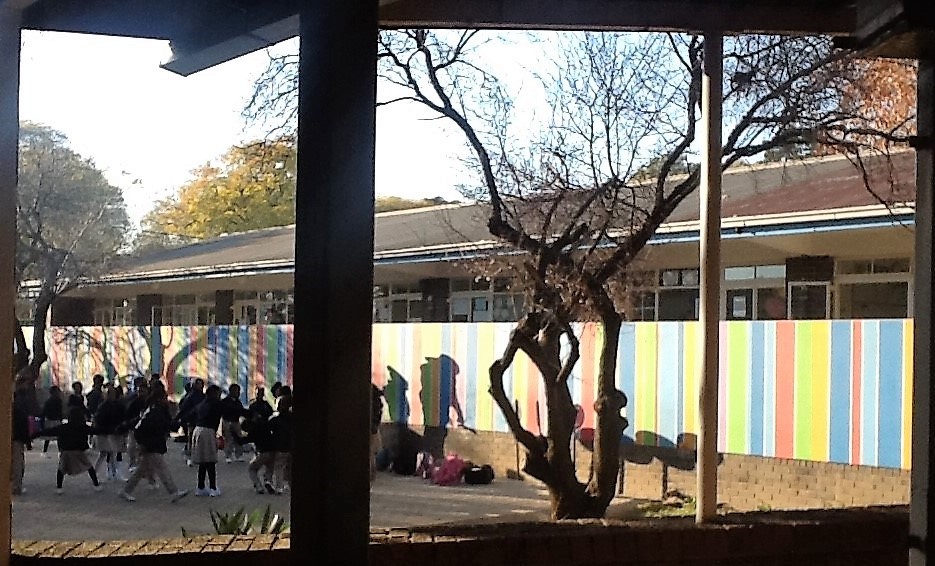 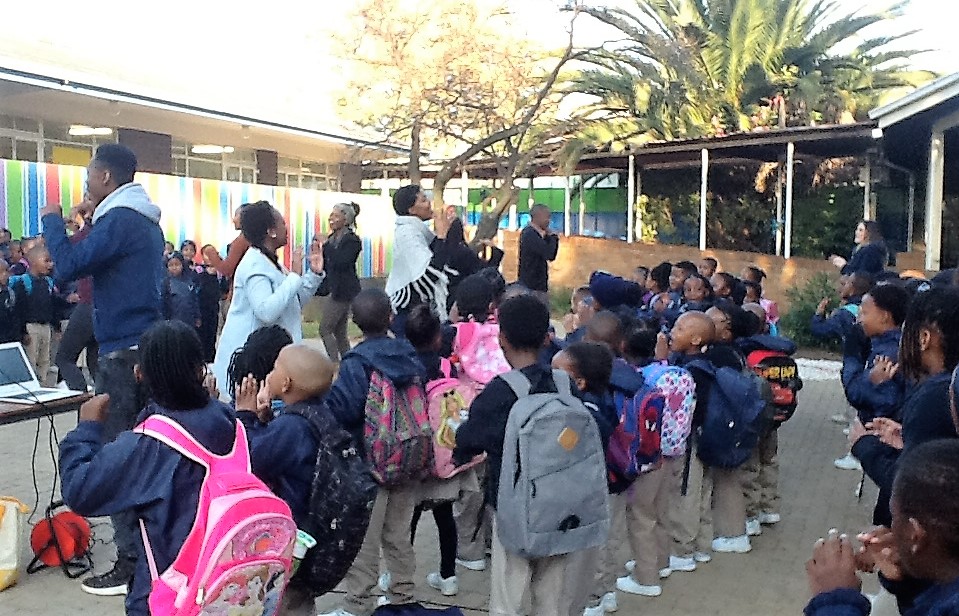 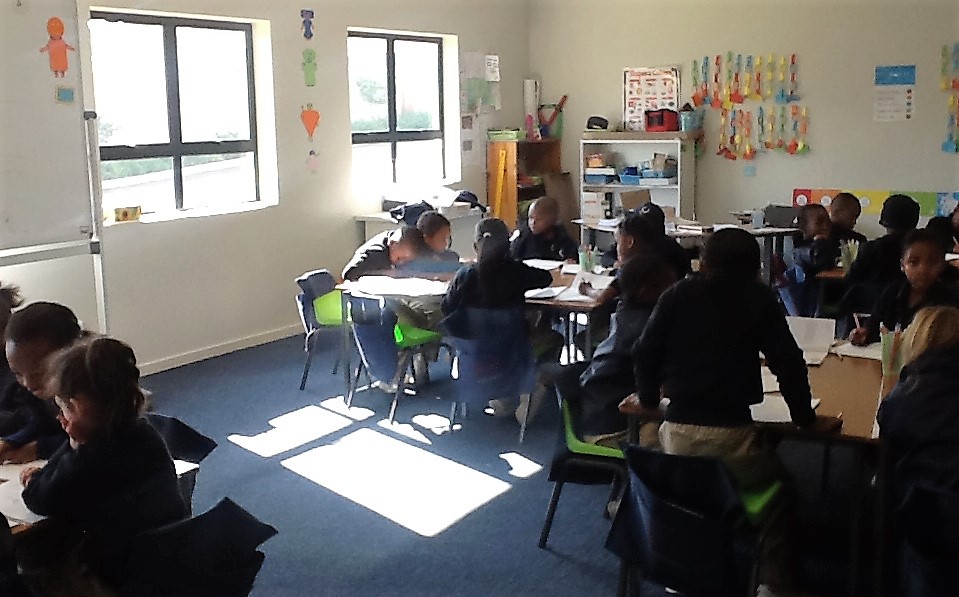 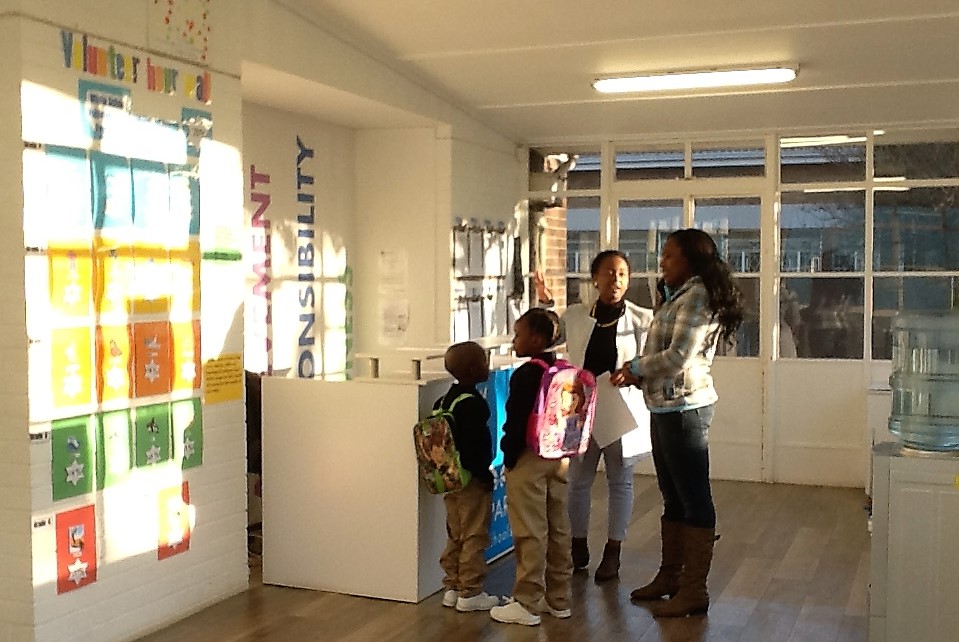 ASE – African School of Excellence – was the second company we approached. I met with the Architect of ASE Tskakane – Thomas Chapman of Local Studio – the day before I saw the school and learned about the process and costs. Being a new build, and in a remote township of mainly low-income households, the costs were extremely tight and the project cost around R2500/sq.m. Tskakane is a township about an hour out of central Johannesburg – near Nigel. ASE Tskakane is a high school. The building is a light-weight steel shed with a striking gable feature that stands out in the barren landscape. I was given a tour by a confident learner who explained how the school operates with a fairly low pupil-teacher ratio. The school day is split into sections – a dialogue class with a teacher, group-work and independent, computer-based learning. From Grade 10, the curriculum is Cambridge (AS level). The Principal, Mr Banda was attracted to the system by the high standards set and the commitment to quality, affordable education.

Fees at ASE Tskakane are R750/month and some learners are on scholarships.

Having seen these inspiring new schools in Johannesburg we are all fired up to get going on the design of an ‘affordable private school’ on a re-purposed office campus in Umlazi – watch this space ! ……